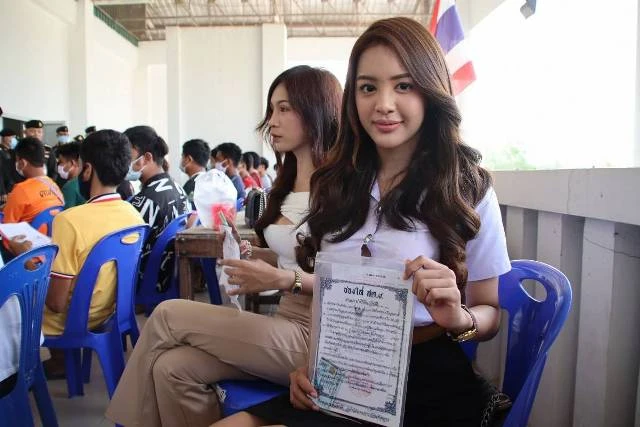 A transgender woman who attended a military conscription lottery in Phutsanulok province has sparked debate by coming out to say that transgender soldiers should be allowed to serve in the military.

Reporters, who habitually mine Thailand’s annual draft lotteries for “hot young trans” stories, were surprised when Naritsara “Lookmenn” Ownwang told them that she should be not be disqualified due to her gender identity – despite the fact she was there to obtain another waiver as a university student.

“Transwomen can serve in the military,” said the 23-year-old Sukhothai College of Dramatic Arts senior. “We can do every job out there. There are female soldiers, so why can’t there be trans?”

Because her birth certificate lists her as male, Naritsara, the winner of several northern beauty pageants, was one of the 284 people up for 67 spots at her local draft office in the annual card-drawing ritual.

Part of that ritual is a tabloid media obsession with the young transgender women who show up and routinely obtain medical exemptions.

While many reacted to Naritsara’s comments with frenzied confirmations that she was indeed very hot, a searing debate also erupted between cultural conservatives, progressives and members of the LGBT community.

The right praised her as a patriot for her determination to serve the nation. Some even held her up as an example to shame those who want to abolish the mandatory system that has helped keep the military central to Thai society for over a century.

The praise was particularly effusive in the same news media which rush to such events to ridicule transgender women each year.

News anchor Nachthapong Muhammad of Thairath TV, a reliable fount of enlightened views, complimented Naritsara for having “the heart of a man,” saying it was the first time he had heard a transwoman say she wanted to serve.

Her comments were not well-received by progressives.

Political commentator Tripop Leelasestaporn, who is also trans, slammed Naritsara as a “hypocrite” taking a convenient stance when she did not have to serve.

“It really annoyed me to see ladyboys be pro-conscription because they know they definitely won’t get drafted,” she said. “Such a hypocrite. She won’t be affected, but why doesn’t she think about the others? Those who have to abandon work and home, children and wives to serve stupid officers in the army.”

“If you want to be a conscript, just dress like a man and draw a red card,” Werapong Natadthohg wrote, referring to the black and red cards drawn to determine whether one has to serve. “Don’t call for something that other ladyboys will feel uncomfortable doing.”

Being drafted is something most Thais of age seek to avoid. Those who can leverage influence or wealth to defer or minimize it do so, while many heterosexual men over the years have been caught dressing in female attire in an attempt to dodge the draft.

Contributing to their reluctance is the military’s abusive culture, and the ever-climbing death toll of recruits who die under suspicious circumstances without anyone ever held accountable. Six conscripts died last year alone.

No, Thai Dudes Are Not Faking Trans to Dodge the Draft: Activists

How to treat ‘katoey’: Thai Transgender Alliance hands out guidelines to military

If you're gonna share your opinions for free on the Internet, why not do it for a chance to win some exciting prizes? Take our 2021 Coconuts Reader Survey now!