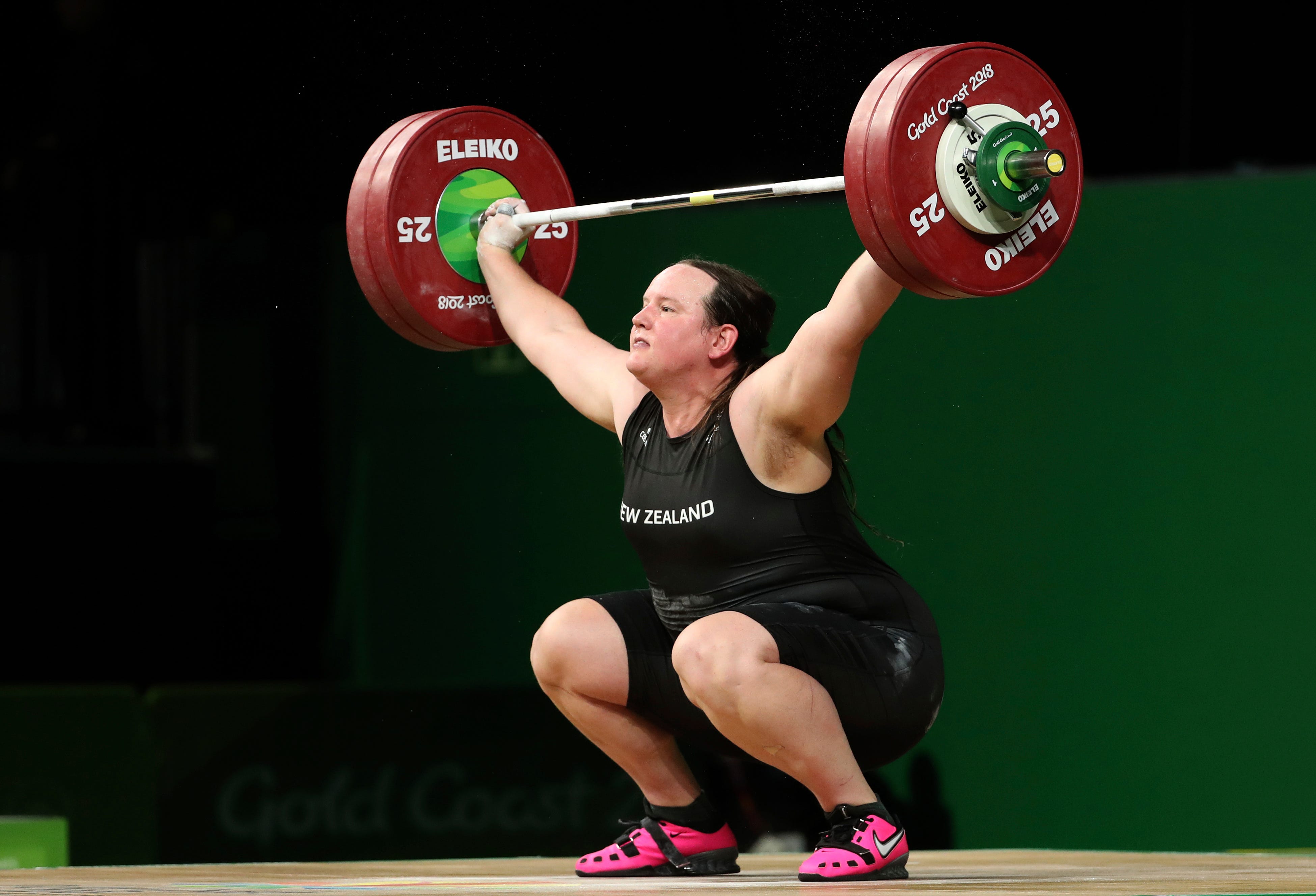 TOKYO – After the Tokyo Games, the International Olympic Committee will release updated framework on transgender athlete participation that seeks to balance fairness and inclusion. Given the competition here, the guidance could hardly be more anticipated.

For the first time in the nearly two decades since the IOC first took a position on the question, openly transgender athletes are competing in the Olympics.

New Zealand weightlifter Laurel Hubbard has drawn much of the focus, and  harassment, for the way the IOC includes transgender athletes. The 43-year-old has become an unwilling participant in a cultural debate about what is fair and whether transgender women have an advantage over their cisgender counterparts.

Canadian soccer player Quinnis the other out transgender athlete competing here, but Quinn's participation doesn’t bring the same scrutiny because they were assigned female at birth and play a team sport.

Though the numbers of transgender athletes participating at any level, let alone an Olympic level, are miniscule, the IOC’s framework stands to have significant influence not just for those athletes but for the sports federations that will take their cues from what the IOC decides.

With little data to determine what, if any, advantages transgender athletes – and women in particular – have, the IOC will update its current consensus statement, which mandates transgender women undergo hormone therapy for at least a year, among other requirements.

“I have to think just looking at the arc of history in sport, even with the hot politics of the issue, the IOC is going to have to find a way to actually balance inclusiveness and fairness,” said Roger Pielke Jr., a professor who studies sport governance at the University of Colorado. “It’s not easy, and maybe nobody will be happy with what they do, but choosing one over the other in the form of a ban seems socially and politically untenable.

“That just doesn’t seem to square with where the world is at and where sport is at.”

Despite that, the discussion in sport has ranged from full exclusion of transgender women – as World Rugby now does – to full inclusion without mitigation of any sex-linked characteristics.

The less caustic part of the debate revolves around whether transgender women who have gone through male puberty retain any advantage and what is needed to mitigate that. Holding on to hard-fought gains for their own inclusion and place in sports, women’s advocates argue for protection of the category.

“This is a large and difficult and complex topic,” said IOC medical director Richard Budgett. “There are no IOC rules and regulations around transgender participation. That depends on each international federation, so Laurel Hubbard is a woman and is competing under the rules of her federation. And we have to pay tribute to her courage and tenacity in actually competing and qualifying for the Games.

“When it comes to the advantages and disadvantages, there’s always more to learn.”

Regardless of the debate, the guidance affects a small number of transgender athletes. Since the IOC released its first consensus statement in 2003, women have had more than 29,000 entries to the Games from 2004-18, according to stats from Olympic historian Bill Mallon.

Cisgender women, whose gender identity aligns with the sex they were assigned at birth, have claimed more than 2,000 medals over eight Olympics in that time.

With little science comparing transgender women athletes to their cisgender counterparts, the IOC is tasked with offering a basic framework that international federations can use to make rules specific to their sport and even event.

“The IOC or any sporting organization has to make policy based on the data that exist,” said Joanna Harper, a researcher at Loughborough University in London who pioneered studies on transgender female athletes. “They have to do the best they can with the information they have at hand. I hope we can get more and better data in the future, and we will come up with better policies in the future as a result of the data.”

Olympic sports have a long history of gender verification, including through visual examination of women’s nude bodies. From the Cold War in the 1960s up until the Sydney Olympics in 2000, female athletes were subject to chromosome testing.

Against that backdrop, the IOC released its first consensus statement on transgender athletes in 2003, requiring sex reassignment surgery including “external genitalia changes and gonadectomy,” legal recognition of their gender and at least two years of hormone therapy.

Seeking to compete in the 2008 Olympics, Worley was the first to be subject to the policy, saying a room of men – some of whom were sport officials and not medical professionals – “sexually and psychologically violated” her.

“Because the IOC handed down these policies, it was assumed that somehow I was a threat to sport,” Worley said. “There’s no science and research to any of this.”

In 2015, she challenged the policy at the Ontario Human Rights Tribunal, arguing it had violated her human rights. The case concluded with Cycling Canada, Ontario Cycling Association and the Union Cycliste Internationale agreeing to review their policies.

Around that time, the IOC was working on revising its consensus statement. Its latest iteration, released in 2015, requires transgender women to declare that identity for at least four years and receive hormone therapy that maintains their testosterone below a specified level for 12 months.

By that point, the NCAA and World Athletics had policies dating from 2011 for allowing transgender women to participate with hormone therapy.

“At that point, the IOC certainly felt pretty comfortable in terms of coming up with new specifications.”

'The science is slender'

As the IOC and international federations look for data to guide their policies, they continue to run into one problem: there isn’t much.

She found the runners had slowed significantly but that they stayed the same relative to their competitors. So if a runner was faster than 82% of her peers before transitioning, she was about the same in the female category.

Harper acknowledged in that study that the science supporting either policy is slim.

A study published in the British Journal of Sports Medicine last year compared fitness test results of 29 transgender men and 46 transgender women in the U.S. Air Force. It found that transgender women performed 31% more push-ups and 15% more sit-ups in one minute and ran 1.5 miles 21% faster than cisgender women.

“We do need more evidence actually. It’s easy to compare cisgender males to cisgender women in performance. But it’s just not as simple as that,” Budgett said. “If it were as simple as that, then clearly it would be unfair. But there is a whole effect of that transitioning that is going to be different in different individuals and can help make it fair enough that you can have meaningful sport and protect all the women who are taking part in that sport.”

A systematic review of the literature published this year in the British Journal of Sports Medicine found hormone therapy reduced hemoglobin levels to those on par with cisgender women. It reduced strength, lean body mass and muscle area, though those values remained above cisgender women after 36 months of hormone therapy.

“That’s not unreasonable,” Harper said. “You’ve got to put trans women into one category or another.”

Some women’s groups, including Save Women’s Sports in the United States and Fair Play for Women in the United Kingdom, oppose transgender inclusion, putting them out of step with the IOC’s current efforts.

A U.S.-based group led by several prominent Olympians, including Nancy Hogshead-Makar and Donna De Varona, advocates for what it calls a middle-ground approach of full inclusion if a transgender woman transitions before puberty, then seeking ways for inclusion with mitigation of any retained advantages if a woman transitions after puberty.

“The science is still coming in, and it is coming in on the side of more needs to be done for somebody to unwind that sex-linked advantage,” Hogshead-Makar said. “We want to follow the science and find out how much time and how much winding has to be done in order to … have it be fair that they are included in the girls and women’s category.”

“There’s always more science, and there’s quite a large amount of research being done at the moment to ascertain the residual advantage after going through male puberty, but you have to weigh that against all the other disadvantages of going through transition,” Budgett said. “There are lots of aspects of physiology and anatomy and the mental side that contribute to an elite performance, and it’s very difficult to say, yes, she has an advantage because she went through male puberty when there’s so many other factors to take into account. It’s not simple.”

The IOC expects to release its new framework in the coming months to help guide international federations on how they can set policies for their sport. One thing is clear – nuance will be key.

Transgender athletes are not a monolith, and when and how they transition might have bearing on considerations sports organizations need to make. Additionally, all signs are pointing to a sport-by-sport approach and perhaps even more variation within a sport.

Safety also would have to be considered, especially in contact and combat sports.

“We want fairness. I think in competitive sport, there should be mitigation,” said Kirsti Miller, a former international-level athlete in Australia who has become an advocate since transitioning. “It shouldn’t be on a strict testosterone level. It’s got to be on an individual base.”

On a sport-by-sport basis, federations will need data to set boundaries designed to mitigate any retained advantages transgender athletes might have while preserving fairness for women.

But even that ignores the realities of sport, which already accept and even celebrate advantages – in athletes’ physiology, primarily, but also in environment and access to resources.

“The notion of fairness and advantage in sports is based to me on the fact that all elite sports are about advantage,” said Eric Vilain, chair of the Department of Genomics and Precision Medicine at George Washington University. “The notion that in sports there should be a level playing field just for transgender athletes would be a complete double standard, in my opinion, because there is no such level playing field.”

While much of the science has yet to be worked out – leaving the debate to a hot-button cultural issue – figuring out how to address this is similar to the Paralympics, Pielke argued. The Games figure out how to classify athletes, and this is no different.

For an Olympic movement that was created for and by white men and has slowly over the decades grown to be more diverse, making this into a classification decision instead of a cultural flashpoint can help the IOC achieve its balance of fairness and inclusion.

“As long as sport is organized around two genders,” Pielke said, “then it’s incumbent on sports organizations to find a way to fit everybody into the gender category that they’re recognized in broader society.”