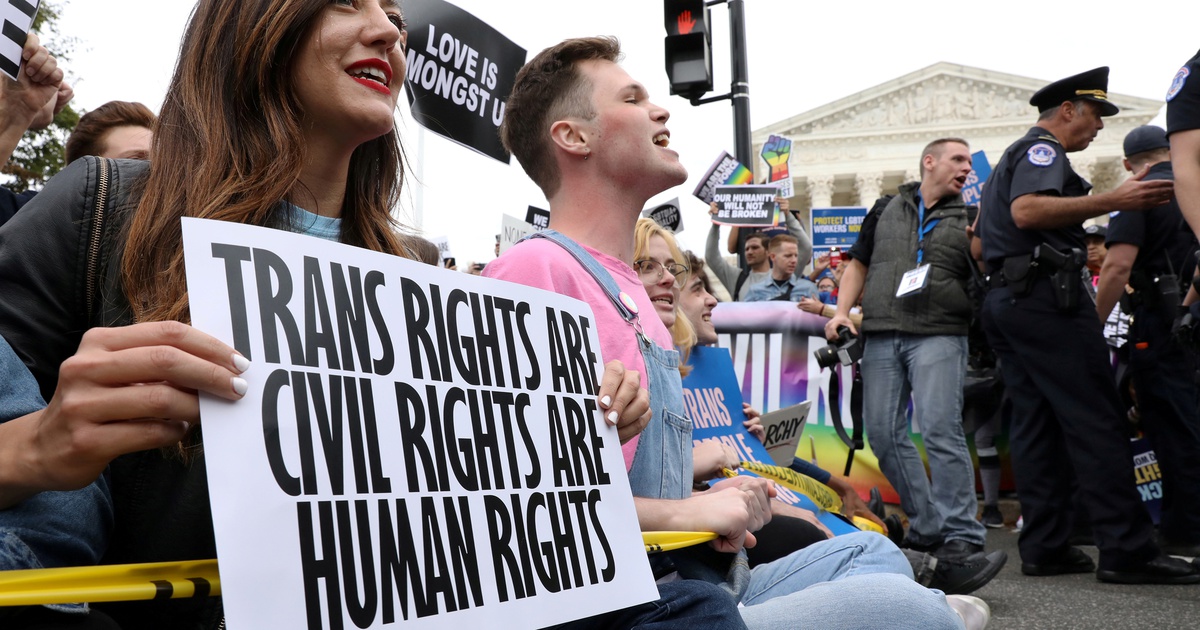 Sign up for The Brief, our daily newsletter that keeps readers up to speed on the most essential Texas news.

Texas Attorney General Ken Paxton is suing the Biden administration over recent federal guidance issued to protect LGBTQ people in the workplace, including a directive that says employees should be allowed to use the bathrooms, locker rooms and showers that correspond with their gender identity.

The guidance also clarifies that misuse of a person’s preferred pronouns could be considered harassment in certain circumstances.

In the lawsuit, filed Monday in the Northern District of Texas federal court, Paxton claims that the U.S. Equal Employment Opportunity Commission violated Title VII of the Civil Rights Act of 1964 when it issued a technical assistance document outlining the impact of a landmark U.S. Supreme Court ruling last year. That ruling prohibited employer discrimination on the basis of sexual orientation and gender identity. Title VII prohibits discrimination against employees on the basis of sex.

Defendants in the lawsuit include the EEOC, commission Chair Charlotte A. Burrows and U.S. Attorney General Merrick Garland.

In a statement, Paxton called the guidance “illegal” and an “unacceptable” attempt “to force businesses, including the State of Texas, to align with their beliefs.”

“If the Biden Administration thinks they can force states to comply with their political agenda, my office will fight against their radical attempt at social change,” Paxton said.

In the lawsuit, Paxton also argued that the EEOC violated the First and 11th Amendments, as well as the Administrative Procedure Act, which specifies how government agencies issue regulations.

The EEOC said in an email Monday that it does not comment on pending litigation, but that it will be represented by the Department of Justice, which declined to comment Monday.

In a statement released in June, Burrows said newly released EEOC resources in the aftermath of Supreme Court’s 2020 ruling in Bostock v. Clayton County “will make it easier for people to understand their rights and responsibilities related to discrimination based on sexual orientation and gender identity.”

“All people, regardless of sexual orientation and gender identity, deserve an opportunity to work in an environment free from harassment or other discrimination,” Burrows said. “The Supreme Court’s decision in Bostock v. Clayton County is a historic milestone that resulted from the struggle, sacrifice, and vision of many brave LGBTQ+ individuals and allies who had championed civil rights for the LGBTQ+ communities.”

Transgender Texans have long been a target of Republican state officials. In 2017, the state Legislature attempted to pass Senate Bill 6, known as the “bathroom bill,” that would have required transgender people to use bathrooms in public schools, government buildings and public universities based on their gender assigned at birth. However, the bill failed to pass even during a subsequent special session.

During this year’s regular legislative session, lawmakers introduced numerous bills targeting transgender Texans, including legislation that would restrict transgender student athletes’ participation in school sports and prohibit doctors from offering gender-affirming medical care. But neither of those measures made it to Gov. Greg Abbott’s desk.

In all three special sessions he’s called since May, Abbott has made limiting transgender student athletes’ sports participation a priority. No such measure passed during the first two special sessions. This year’s third special session started Monday.

If you appreciate reporting like this, you need to be at the all-virtual 2021 Texas Tribune Festival happening now through Sept. 25. Join as big names from politics, public policy and the media share what’s next for Texas and beyond. Explore live and on-demand programming, including dozens of free events, at tribfest.org.