I celebrate my transgender son, yet I grieve for his ‘dead name’ - The Boston Globe

I celebrate my transgender son, yet I grieve for his ‘dead name’ - The Boston Globe 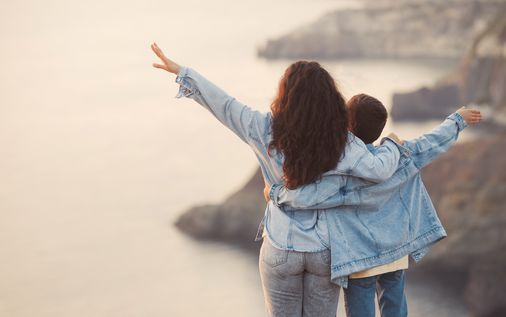 My daughter was the kind of child who stopped people in their tracks. On several occasions, strangers approached me in passing to say, “That one is special.”

Her toddler years were filled with giggles and mischief that I couldn’t discipline because even “time out” for her was play. Her favorite color was first eggplant, then pink. I didn’t even like pink. From the moment she could speak, she had plenty to say, whether constructing elaborate make-believe worlds or planning her future. She was irrepressibly positive. If the sun was shining, she would proclaim, “What a beautiful day!” If it was raining, “I love the rain!”

She was a star student from her first day of school. Her first-grade teacher shared with me a special story. My daughter walked into class in her pleated school uniform, new distressed denim jacket, and bobbed hair. When the teacher complimented her style, my daughter grinned and flipped her hair to reveal a side shave before flipping it back. It was a moment of self-confidence that struck the teacher as enviable, even for an adult.

Not long after, my daughter discovered G-Dragon and other K-pop boys, but she also played with two Barbies as a couple. I figured I was catching a glimpse of her future and felt that she would be part of the LGBTQ community.

We moved often, but my daughter always made friends. She was intensely social. When other kids’ behavior perplexed her, she’d open up to me about it. I’d offer my best counsel and she’d kiss me and say, “You’re my best girlfriend.”

And that’s how we were. I was Mom, but we had fun. We exchanged music. I recommended books, and in time she recommended books to me. We played makeover, experimented with her hair. She’d ask for movie nights so that we could watch films like “Clueless” and “Legally Blonde.” These were some of my most cherished moments.

Whenever I said her name, I thought of a character from the Harry Potter universe — strong, brave, unfailingly kind.

Quarantine strained my custody arrangements. I was penniless and stuck in Idaho at my mother’s home for a few months while my children went back to Massachusetts to stay with their father.

It was during a brief visit in Boston with my two kids that I learned I no longer had a daughter. At what had been our family home, I saw my older child first. We hugged and I asked, “Where is your sister?”

The child I had known until that moment as my daughter rounded the doorway and, with an air of uncertainty, threw up jazz hands.

His new pronouns, he informed me, were he/they, and he wanted to be called Charlie or Charles Wallace. I’d said in the past that if he had been born male, I’d have named him Charles Wallace after the genius empathetic hero of the novel “A Wrinkle in Time” and after my grandfather, Wallace Charles. Charlie’s declaration was easy enough to roll with — his happiness and well-being were and are all that matter to me. I would love and support both of my children no matter what. I’d always encouraged them to be comfortable in who they are, and here was Charlie telling me who he was.

But as the weeks wore on, he became distant without explanation. Perplexed by the silence — no communication was unusual for my children — I continued to reach out every day until Charlie texted me: “I’m going by Zero now.”

My child wrote a fiery response, whose conclusion was that he would not respond to Charlie, Charles, or his “dead name.”

It was the first time I’d heard the term. I learned that a dead name is the one given at birth and left behind when a person changes their name to affirm a new identity. To use the dead name of a transgender, gender queer, or nonbinary person is a particular act of aggression. It is an affront to and an invalidation of their person.

Dead name. Dead. My girl, dead. My purpose, the most important job I had, was to love and protect my children, and this child seemed to be slipping away from me. I felt as though all that I had thought was real had become a myth. How could I say I even knew my own baby, the one I’d carried, cherished, nurtured for 12 years? The one with such emotional intelligence, such grace, who touched the heart of everyone they met? I wasn’t just pining for my children thousands of miles away in this terrible situation. I grieved for my daughter. As I did, I wondered: Could I still talk about my child’s past or were the memories attached to that before time of his life gone with the name he now forbade me to speak? Would we still watch “Legally Blonde” together? Would we still play makeover? Would I be excluded from his experience of puberty? From crushes? What else was I losing? It was a heartbreak, a kind of death. My daughter was gone.

In my bid to better understand my feelings, I discovered that I’m not alone. A 2018 study found that most loved ones of a person in transition experience grief, even as they support the person. My friend Cam described her own sense of loss about her partner’s transition: “I completely support [him], but I’m . . . I’m mourning!”

Jamie Lee Curtis has been candid about the difficulty of letting go of her trans daughter’s dead name. Likewise, Caitlyn Jenner’s children have spoken publicly about their struggle to grasp her transition: “Should we still call you Dad?”

It’s much more common for loved ones to keep silent about their emotional needs for fear of appearing unsupportive. In a recent letter to a parent struggling with a child’s gender transition, therapist Lori Gottlieb suggested seeking the comfort of as many supportive adults as possible. Most phone-based mental health services, such as TalkSpace and BetterHelp, offer counseling to all involved in a gender transition. And the National Center for Transgender Equality has resources for starting support groups in schools.

In my moment of grief and struggle to embrace my child’s new name, I turned to my friend Oscar.

“Zero is an excellent name!” he said. “So many star athletes have gone with the number zero. He’s trying to figure out who he is.”

It was exactly what I needed to hear. Everything that made my child who they are was still there. Understanding where Zero was coming from would be a greater act of love and protection than clinging to an identity that no longer fit.

I texted Zero: “Sweetie, please don’t be mad at me. A part of me knew I shouldn’t react, but I don’t want you to think you’re nothing when you are infinite!”

He wrote back immediately: “I’m not mad, Mom. But I chose Zero because it is infinite! It was a symbol invented by the Mesopotamians to mean both everything and nothing. When you grow your bank account, you are adding zeros. It’s exponential!”

I took it all in and felt a sense of peace.

Since that day, I’ve accepted that this grief will take time to process, and I’m OK with that. Meanwhile, in his journey of self-discovery, my child has settled on the name Dean, which I love. Instead of a character from Harry Potter, I now think of Dean Moriarty, the driving force of adventure, courage, and creativity in Jack Kerouac’s “On the Road.” We’re riding out this adventure together, my son and I.