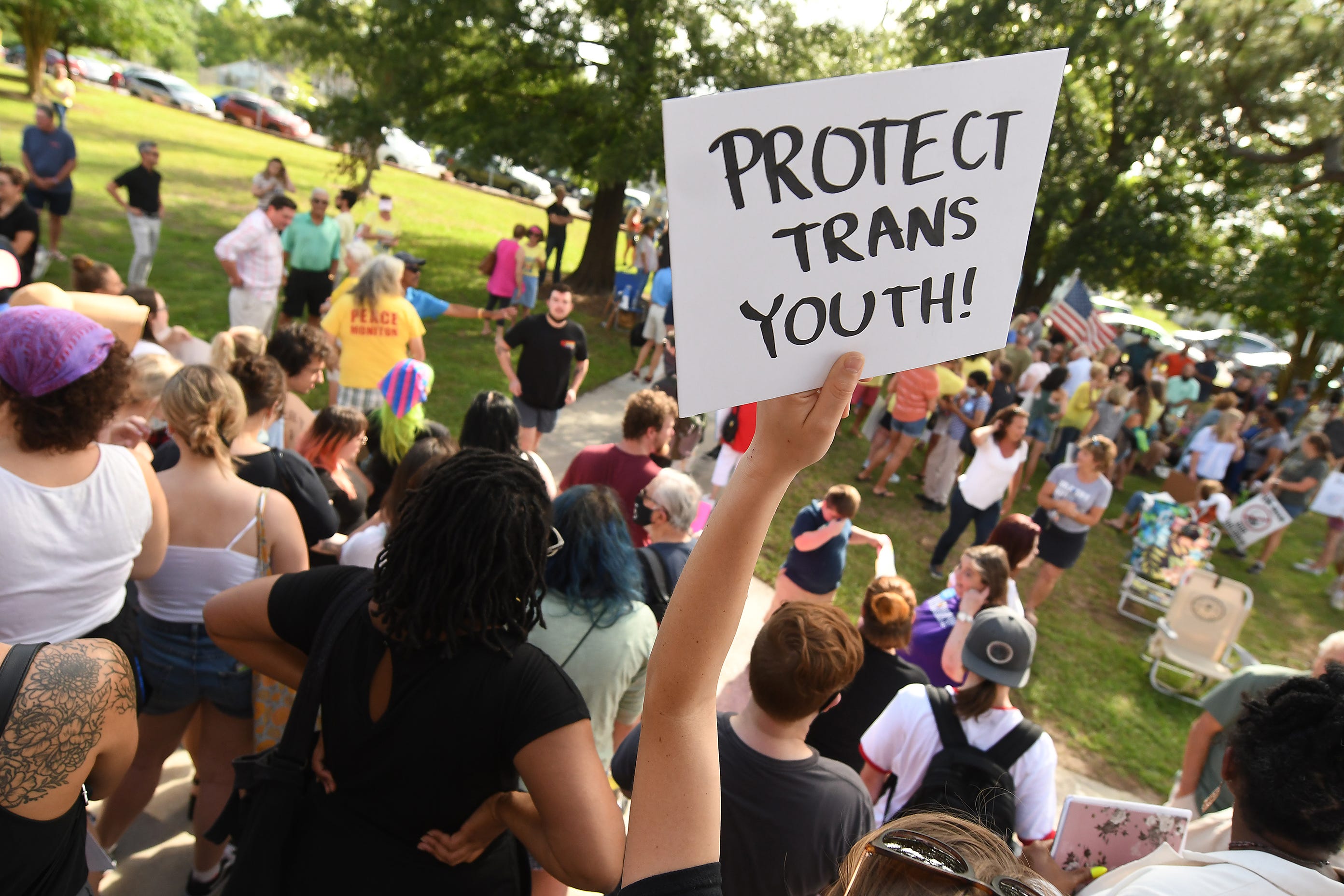 The crowd booed as one school board candidate accused another of “playing footsy with Q Anon supporters” during a town hall meeting in April.

“When you say something like that, you invite violence onto my family,” Democrat Nelson Beaulieu said to Republican Melissa Mason, attempting to overcome shouts from the audience. “You invite violence because people react strongly and with anger if you tell them we’re hurting children. We’re not doing that.”

Beaulieu was responding to accusations by Mason that the district was “grooming” children into keeping secrets from their parents about their gender identity.

It’s the latest focus of conservative protesters who have increasingly used monthly school board meetings as forums to criticize how equity, diversity and inclusion are being taught across New Hanover County.

On a national level, conservative lawmakers have begun a push to rid schools of content and curriculum that addresses the history and experiences of the LGBT community, USA TODAY reported.

By April, more than a dozen states had proposed their own Don’t Say Gay bills.

Locally, in recent weeks, Mason and many of her supporters have targeted the district’s “gender support plan,” which allows transgender and non-binary students to request name changes and other accommodations at school.

Mason alleges the school district is keeping secrets from parents if they are considered to be unsupportive of their child’s gender identity.

She calls it no different from the “grooming” of students that occurred over three decades by convicted sex offender and former New Hanover County teacher Michael Kelly.

In 2019, Kelly pleaded guilty to 59 charges, including indecent liberties with minors. A lawsuit against the school district filed by 14 of his victims is set to go to trial this fall.

“When you talk about having this conversation with a child, a teacher, an administrator, a counselor having this conversation with a child and saying we don’t have to tell your parents, that sounds so very much like every grooming story we have ever heard in the history of grooming,” Mason said during the candidate town hall in April. “If it isn’t, please come explain to me how it isn’t. But it absolutely is.”

A look at the NHCS gender support plan

The gender support plan that has come into question in recent weeks is a six-page, confidential document that student and supportive adults, including teachers, administrators, counselors and parents, go through to identify accommodations that may be needed to support a student’s gender identity.

Actions could include changing student names in district systems, informing teachers of students preferred names and pronouns to be used in classes, providing gender neutral bathroom and locker room options to students, and more.

The StarNews requested comment from the district regarding the gender support plan on April 20, but Title IX Coordinator Jarelle Lewis was out of office, a spokesperson said.

The StarNews again requested comment from the district on April 29 and May 4. A spokesperson told the StarNews Lewis was still not available but the StarNews could gather information on the support plan when it was discussed during the May school board meeting.

Notes in the school board agenda show Lewis planned to update the school board that the gender support plan is “not being used at this time. However, New Hanover County Schools supports LGBTQ+ students as required by law.”

A misunderstanding or intentional disinformation

Support plans are rarely used without involving a parent, and oftentimes it's the parent who initiates the process of getting accommodations for a transgender or nonbinary student, said Craig White, supportive schools director for the Campaign for Southern Equality.

White frequently works with schools in North Carolina and around the south to help guide them in creating safe spaces for LGBT students, and said the idea that schools are frequently going behind a parent's back is "either a misunderstanding or intentional disinformation."

"This is just another form of the anti-trans political theater," White said.

The New Hanover County Schools document includes a question about parent support. Students are asked to rank how supportive their parents or caregivers are toward their gender identity on a scale of one to 10. They are also asked what considerations should be taken when addressing student gender identity with parents.

White said typically the only time a parent is excluded from a conversation about a student's gender identity is if the student's safety is at risk.

Gender support plans are handled on a case-by-case basis, and while parent involvement is always the goal, they might be excluded from the conversation depending on their supportiveness toward the student as well as student age and maturity, Lewis said during an April 2020 Title IX committee meeting.

Schools can often be a safe place for students who don’t have support at home, according to a Frequently Asked Questions document provided by the district’s Title IX office.

That’s why the district uses the gender support plan and involves different supportive adults on a case-by-case basis to ensure students are receiving the help they need to feel safe at school and home, Lewis said in the April 2020 meeting.

What is legally required of schools?

Transgender and nonbinary students have certain protections under law, even if they are under the age of 18, and schools are required to abide by those laws. In particular, LGBT students are protected from discrimination in public schools through Title IX, which bars gender-based discrimination in schools.

“Public schools have obligations to trans students, to protect them from discrimination, and to make sure that that school is a welcoming and safe environment for all students,” said Alexis Rangel, policy counsel for the National Center for Transgender Equality.

For example, schools must allow students to use the bathroom or locker room that best fits their gender identity. Schools can provide private, gender neutral bathrooms or locker rooms as an option, but they cannot require a transgender or nonbinary student to use them. Teachers are also not allowed to purposefully use the wrong name or pronouns to address a student.

Schools must protect student privacy, and those involved in gender support plans cannot provide information about a student’s gender identity to someone within a school that the student has not consented to knowing about the gender support plan, Lewis said during the April 2020 meeting.

However, that gets tricky when it comes to parental rights. While schools have an obligation to protect a student’s privacy, they are also required to adhere to the Family Educational Rights and Privacy Act, or FERPA.

FERPA gives parents the right to inspect their child’s school records when requested, though that doesn’t mean they have to be involved in the gender support plan meetings or process.

“NHCS will make a good faith effort to find common ground between student and caregiver wishes,” the district’s FAQ reads. “Age and maturity of the student requesting the support would be considered in determining appropriate supportive measures in addition to other relevant factors.”

Students do have the right to have gender support conversations without parents involved, and can even request it be a private conversation between themselves and an administrator or the Title IX coordinator, Lewis said during the April 2020 meeting.

Rangel said schools are obligated to do what they can to keep students safe, first and foremost. Their safety and well-being should be the top priority to their teachers and administrators when constructing a gender support plan.

Segregation in NHCS: The latest on the StarNews' investigation

“What's in the best interest of students should always come first,” Rangel said. “There's a lot of dangerous situations and privacy concerns that can come into play, and students and teachers and administrators should always put student safety, first and foremost, at the top of the conversation.”

For the safety of transgender students

The idea that schools are attempting to groom students and their sexualities is no new tactic to keep the LGBT community out of the classroom, Rangel said.

In the 1970s, protesters used the same argument in an effort to keep gay and lesbian teachers out of the classroom, she said.

“The idea was to keep gay and lesbian adults out of the classroom because they put children in danger, and that wasn't the reality in the 70s and 80s, and that’s not the reality now,” Rangel said.

According to the American Civil Liberties Union, when a transgender student initiates a conversation about their gender identity and need for support, it’s vital for a school to identify how supportive parents and caregivers are to avoid putting a student at further risk of harm to best support the student.

Transgender youth who are not supported by their families often struggle with rejection, mental health crises, and homelessness, Rangel said.

In a survey conducted by the National Center for Transgender Equality, one in 12 respondents who came out as transgender to their immediate family were kicked out of their home, and one in 10 ran away from home. One in 10 also reported a family member become violent towards them after they came out.

White said transgender and nonbinary youth who have support from their family, school and peer group will typically thrive. When one or more of those groups is not supportive, it becomes even more vital that the others take extra steps to support them, because without that, issues like depression, anxiety and suicidal ideations are much more common.

According to The Trevor Project, more than half of transgender and nonbinary youth report seriously considering suicide.

That’s why often, schools play such a critical role in the lives of transgender students, Rangel said.

“Safety of children in schools is a top priority for everyone. To reiterate, we want trans students to be able to exist and to be safe in schools just like everybody else, and in order to do that, they need to be able to trust the adults that they're with,” Rangel said.