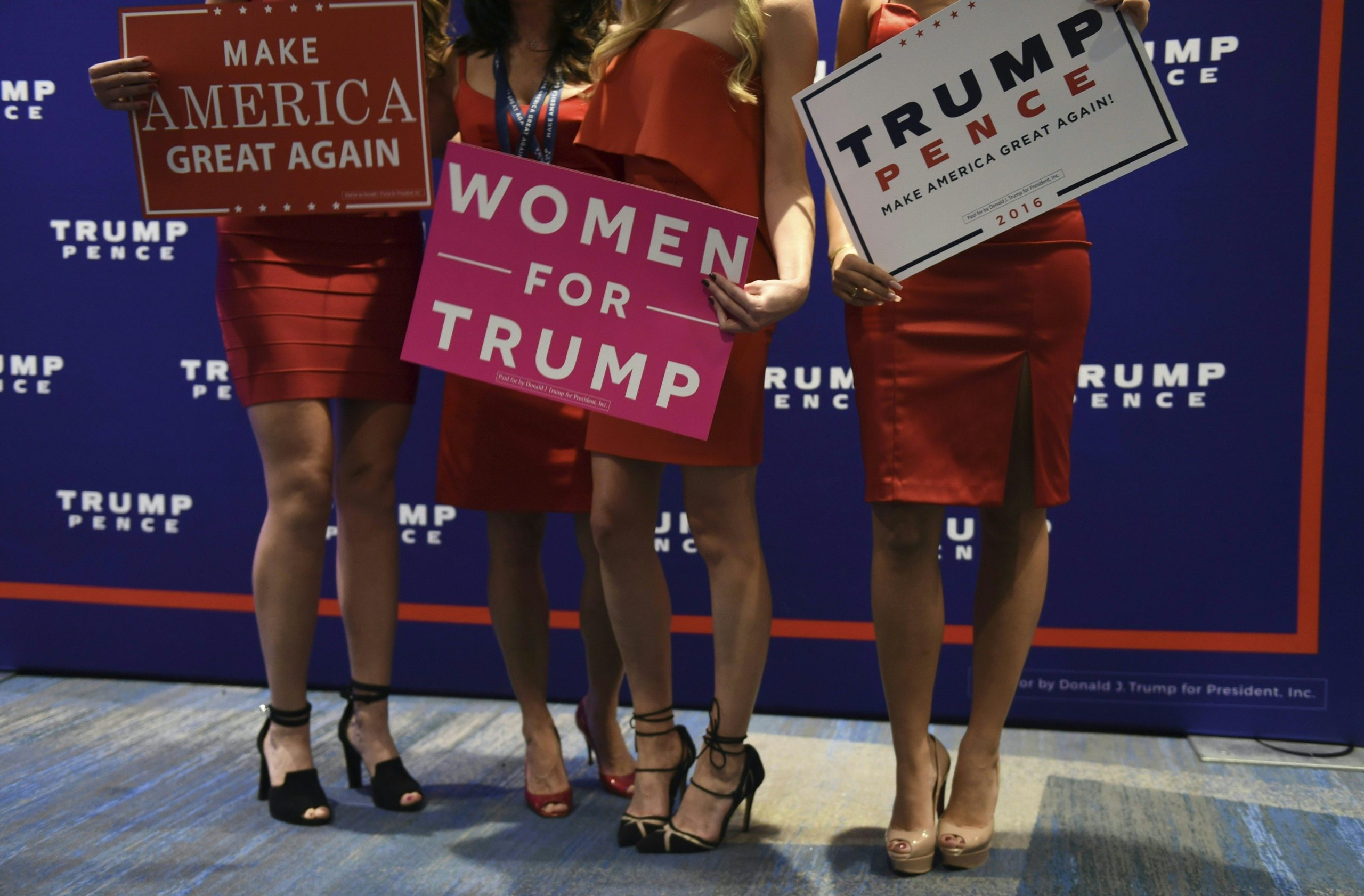 Supporters of Donald Trump pose for photographs during election night at the New York Hilton Midtown in New York on November 8, 2016. (TIMOTHY A. CLARY/AFP via Getty Images)

White feminism has a lot to answer for, according to Alison Phipps – academic, activist and author of Me, Not You: The Trouble with Mainstream Feminism.

And that’s why she wrote this book, which reckons with political whiteness, carceral feminism – the kind that sees prisons as solutions, rather than problems – and the exclusion of trans women and sex workers from the mainstream (white) feminist movement.

Phipps tells PinkNews that she wrote this book for people like her: white women who identify as feminists, who might be involved in feminist activism and are curious about intersectionality, but who might have sometimes felt uncomfortable with mainstream feminism and are unsure why.

While white, middle-class feminists promote a certain kind of “gender critical” feminism, Phipps’ book is a reminder of how much is left wanting by this.

In this way, Me, Not You acts as a reckoning for white feminism, which it calls out in chapters ranging from ‘Gender in a right-moving world’ and ‘Political whiteness’ to ‘The outrage economy’ and ‘Feminists and the far right’.

These are the key takeaways.

Capitalism needs women to do work for free.

“Capitalism relies on the work of social reproduction – the work of reproducing and caring for human life, so having babies, looking after elderly relatives, teaching kids, nursing sick people – but it doesn’t really want to have to pay for it.

“So, capitalism profits by first defining that as women’s work, and then either confining women to the home to do it for free, or segregating women into parts of the labour marker that do that work for extremely low pay and in really crap conditions.”

“Although not everybody identifies with the binary, it basically sorts people into one of two categories.,” Alison says.

Anti-feminist and anti-LGBT+ movements are all part of the same package.

“So, making sure that women do the work of social reproduction, either for free or for very low pay, but also making sure the nuclear family survives.

Right-wing crackdowns on trans rights will come for women’s rights next.

“You can see it in these right-wing movements worldwide. So, for example, Orbán in Hungary – he cracked down on trans rights first, and now he’s cracking down on laws against domestic violence.

When we talk about people on Mumsnet, who say things like, “I don’t agree with Trump, but on the trans issue he’s spot on” (one thread title, about Trump’s 2018 move to legally erase transgender people, is ‘S**t. Now I agree with Trump!“), Alison is very clear: this is strategically “really stupid”.

“You want to say to them: ‘Do you not think that once he’s done with the trans people, he’s not going to come for the lesbians? And then all of the other women?'”

‘Gender ideology’ is a far-right dogwhistle, and it’s not clear why mainstream white feminism is still using it.

“I don’t really know how it’s happened, but it has happened, hasn’t it?” Alison says, slightly incredulous.

“These feminist groups are using the trope of gender ideology in their attacks on trans people. And they know – they must know, it’s been pointed out to them so many times – that this is a far-right dogwhistle.

“‘Gender ideology’ originated with the Christian right. Bolsonaro uses it, Orbán uses it, Trump probably uses it. They can’t not know! But they continue to use it.

“These feminists just don’t seem to care. Their hatred of trans people seems to just trump any other consideration they might have.”

Mainstream feminism wants to be in charge of defining who counts as a woman.

“White feminism has always been very one-dimensional,” Alison says. “It has only really been able to see gender in terms of its analysis of oppression.”

“Flavia Dzodan has called ‘TERFism’ a kind of settler-colonial mentality, because it’s about policing the borders, basically.

“It’s about naming, and having the power to name: I’m a real woman, you’re not a real woman. And I think that is an incredibly white thing to do, the need, and the power, to name.”

And white, middle-class women are the main transphobes in the UK.

With the important caveats that there are some working-class, very socialist women on board with transphobia, which Alison admits she understands less well, as well as a number of Black women and women of colour in the UK’s TERF movement.

“But mostly, it is white bourgeois women. Also the same kind of women who think that sex work is not real work, and that sex workers are damaging to feminism.

“Again, this is about who counts as a woman, but also who is a respectable woman, a good enough woman who is allowed to be a feminist.”

The question feminism must take on is not who is a woman, but who does the work of care.

It’s mostly, but not only, cisgender women who do the work of care, Alison says, “and trans and non-binary people especially do a huge amount of that care work in society”.

“‘Who does the work of care?’ is one of the key questions for me, for a feminist movement,” she says. “And then, ‘How do we reduce harm?’, ‘Who is exposed to violence?’

“Cisgender woman are massively at risk of violence. But we’re not the only ones.”

‘Authentic womanhood’ is a weird hill to die on.

“What I don’t understand,” Alison says, “is a feminism that seeks to shut the door against other people who are doing the work of care and social reproduction, who are really deeply at risk of violence, in the name of ‘authentic womanhood’.

Why? “It’s rooted in disgust,” she says.

“It’s a disgust at difference, which is really deeply bourgeois, and it’s also a kind of obsession with our own victimhood.

“White, privileged feminists, a lot of them have experienced sexual violence or domestic violence, and they’ve had terrible experiences. And they deserve empathy and support for those experiences.

“But what they should not be able to do is to centre those experiences to the exclusion of other people.”

“I think these feminists find sex workers deeply, deeply threatening because to them sex work is something that commodifies women’s bodies and causes sexual violence.

“And we can argue that point, you know, whether we think they’re right about that or not.

“But there is no ability to go beyond that and think well, even if that is the case these are women who are trying to survive in the best way they can, as we all are, and should we really be punishing them for what’s wrong with the system?”

White feminism and the Karen discourse.

“I think the defensiveness about Karen is because white feminists do not see themselves as anything other than victims,” Alison says.

“It’s because [they think] only privileged white women count as women. So anything that criticises them has to be misogyny. Anybody who disagrees with them must be a misogynist.”

You’ll have to read the book to learn about this one, though, because the convoluted and tangled web by which the video for Rihanna’s bop “Bitch Better Have My Money” becomes “misogynist”, in the eyes of white feminists, is far too long and complex for this list.

You can get a copy of Alison Phipps’ book ‘Me, Not You: The Trouble With Mainstream Feminism’ here.