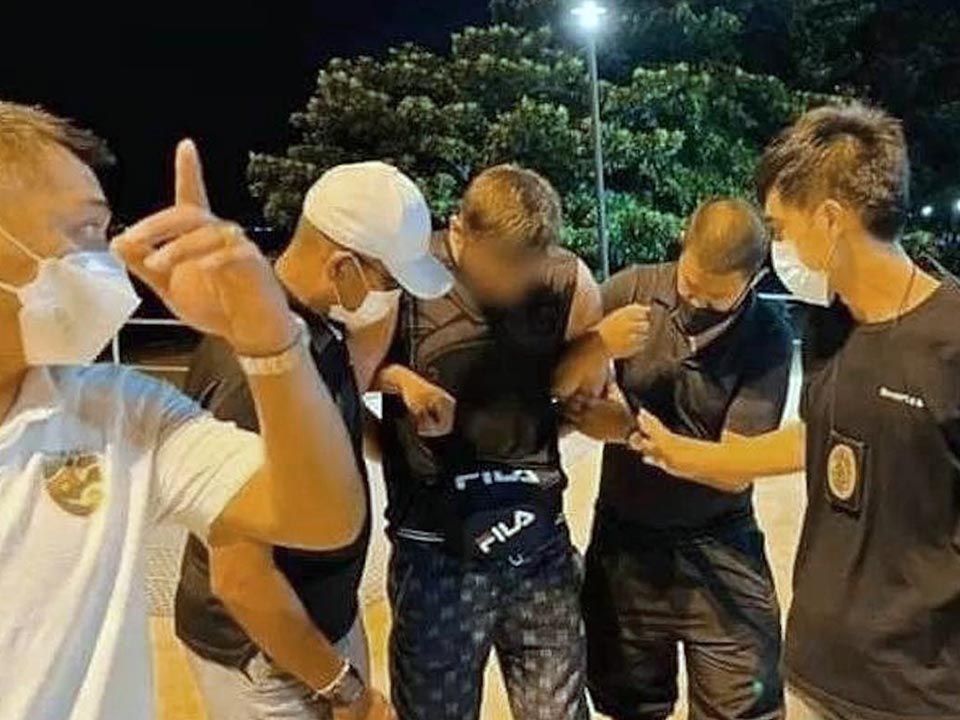 A Lithuanian man has been arrested for allegedly bludgeoning his transgender girlfriend to death in Surin, killing her dog and using her bank account to party in Pattaya.

Malius Kunikas, 32, was captured on Yim Yom Beach around 12:30 a.m. Thursday after Northeast police tracked him via the dead woman’s mobile phone, which Kunikas allegedly stole.

The body of Thiraphong Lamluea, 31, was found June 15 inside a storage shed behind her two-story house in Prasat District of Surin. Investigators said she had been killed May 25 and was only found when neighbors called authorities over the smell coming from the shed.

Police said a crying Kunikas admitted he’d fought with Thiraphong, apparently violently. He had numerous cuts and bruises all over his body, including a wound on the bridge of his nose.

Police also recovered a video from Thiraphong’s Apple iPhone with several video clips of the two arguing. They were recorded around 10:25 p.m. May 25, a day before Kunikas was spotted dragging his luggage to the Surin bus station for his trip to Pattaya.

Once in Sin City, Kunikas partied with bargirls at ladyboy bars on the Pattaya’s Soi Buakhao using funds siphoned regularly from Thiraphong’s bank account. Investigators said numerous transfers from her account to a Thai man’s account – to which Kunikas had access – were made between May 25 and June 8.

The Lithuanian has been taken back to Surin where DNA testing is underway. If it matches that taken at the scene, he will be arrested. Police also will try to make Kunikas re-enact the crime before family and the media, a practice condemned around the world.

Thiraphong’s mother, Wandee Lamluea, 47, said her son and Kunikas had been in a relationship for about seven months after meeting in Phuket. Kunikas had been to Surin twice – in January and May – staying at a hotel the first time and Thirapong’s house the second.

Wandee claimed the Lithuanian often got drunk on beer and brought a case to her house to drink together on May 26, after Thirapong was already dead. Wandee claimed she thought she saw blood on his legs and notice several bruises.

When she inquired about his injuries, Kunikas said he broke a bottle that fell and cut his leg. They drank together around 9 p.m. and Kunikas allegedly then stole Thirapong’s car, driving it to the bus station to catch a 10 p.m. coach to Pattaya.

Wandee speculated that jealously was behind the killing as Thirapong also had a British “boyfriend” whom she had known for seven years.

The original version of this story appears in the Bangkok Herald, a Pattaya Mail partner.