KUALA LUMPUR, June 25 — It was a rainy night. A trans woman was walking home when suddenly she saw a group of boys eyeing her before they rushed to stop her in her tracks.

Meanwhile, elsewhere, another group of young men marched along a road before barging through a house’s front gate and banging on the door. Inside, two trans women waited anxiously, asking themselves if religious enforcers were raiding them.

So instead of an assault, the group of boys were actually planning to escort the trans woman safely home after hearing of a threat from some men nearby.

The men who banged on the door were actually merely advising the women to be careful following complaints from some of the neighbours.

“We want to change the discussion. We didn’t want to roll out the same scenarios over and over again.

“Maybe by watching the video, it may create a different way for them to think,” said SEED Foundation’s executive director Mitch Yusmar Yusof during the campaign’s launch in the group’s drop-in centre in Chow Kit here yesterday.

Mitch gave the example of changing the mind of employers when they meet transgender job candidates, another scene portrayed in the video where the interviewers instead respectfully ask for the candidate’s preferred pronouns.

In the video, this hopeful message was contrasted with a finding in a study by the Human Rights Commission of Malaysia (Suhakam) which found that sex work is one of the most common full-time occupations of trans women respondents due to discrimination in the job market.

“We know it’s hard to capture people’s attention. But if we’re able to just get one person to look at the issue differently, then that’s a job done already,“ the trans man activist said. The campaign included the “scripts being flipped“ in four scenarios involving employment, access to public toilets, gender-based violence, and persecution by religious authorities.

In addition, prominent trans woman activist Nisha Ayub was also interviewed on how attitudes towards the transgender community in Malaysia have become worse in recent decades despite earlier acceptance that peaked in the 1970s.

Produced in-house by SEED Foundation with support from the United Nations Development Programme (UNDP) and United Nations Children’s Fund (Unicef), Mitch said the actors were all part of the Chow Kit community where SEED is situated at.

It took around three weeks to complete back in 2020 before Covid-19 hit and work to promote it stalled, he said.

Social activist Datin Paduka Marina Mahathir who launched the campaign together with SEED’s new centre, expressed her solidarity with the community for their resilience.

“The trans community has unfortunately always been the most visible and easiest to attack all these time in our society. Which is a shame,” she said during her speech.

Marina also made an appearance in one of the clips, calling for a shift in looking for the positives in religious edicts, in response to global watchdog Human Rights Watch’s report that pointed out how the transgender community suffers from raids and arrests by religious enforcers.

Others who appeared in the campaign urging the public to “flip the script” on the community included trans entrepreneur Laeticia Phylliscia Raveena, child rights activist Datuk Hartini Zainudin, and Klang MP Charles Santiago.

The clips will be made available on platforms such as YouTube soon. 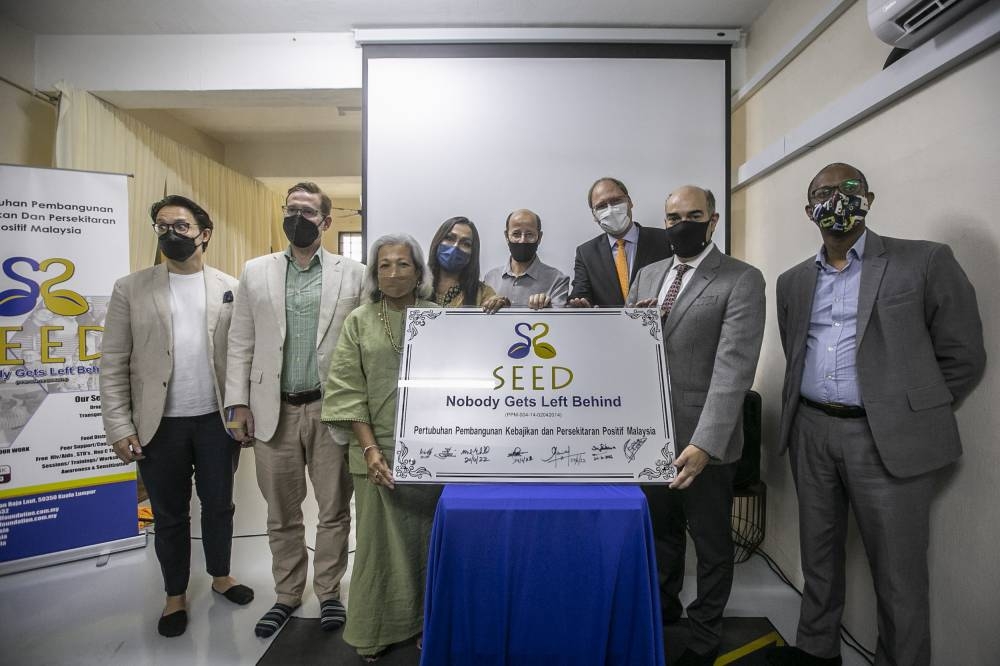 Speaking to Malay Mail during the launch, Mitch and Nisha said the clips were produced in 2020 amid heightening transphobia in the country after then Islamic affairs minister Datuk Zulkifli Mohamad said the Federal Territories Islamic Religious Department has been given “full licence” to not only arrest but also provide religious education so that the transgender community can “return to the correct path”.

Zulkifli was lambasted by the transgender rights group Justice for Sisters who said it was already observing concerns from the community over their personal security, safety and wellbeing after the statement.

The federal Islamic authority Jakim also had that year filed a police report against an activist for tweeting about the practice of religious conversion therapy against LGBT Muslims here, claiming that her tweet was manipulative, malicious, and aimed at hindering and restricting the right to freedom of religion of queer Muslims.

Nisha said the unfortunate reality is that the transgender community would only grace the headlines when they face persecution and tragedy, but she believed that the campaign will now offer some hope instead.

In the video, Nisha mentioned how media portrayals of trans persons were more positive before 1982, a turning point when a “fatwa” or religious edict banned sex reassignment surgery, which assists trans persons in affirming their gender identity.

“The media always portray the sadness befalling the community. But there is also the reality of hope, where we have people who can change the scenario,” Nisha told Malay Mail.

Mitch suggested that the media can also join in “flipping the script”, by sticking to journalistic truths in telling the community’s stories rather than colouring their coverage with personal beliefs.

“To flip the script we must understand what kindness means...Our society really needs a lot of kindness, which is to treat everybody kindly regardless of who they are,” said Mitch.