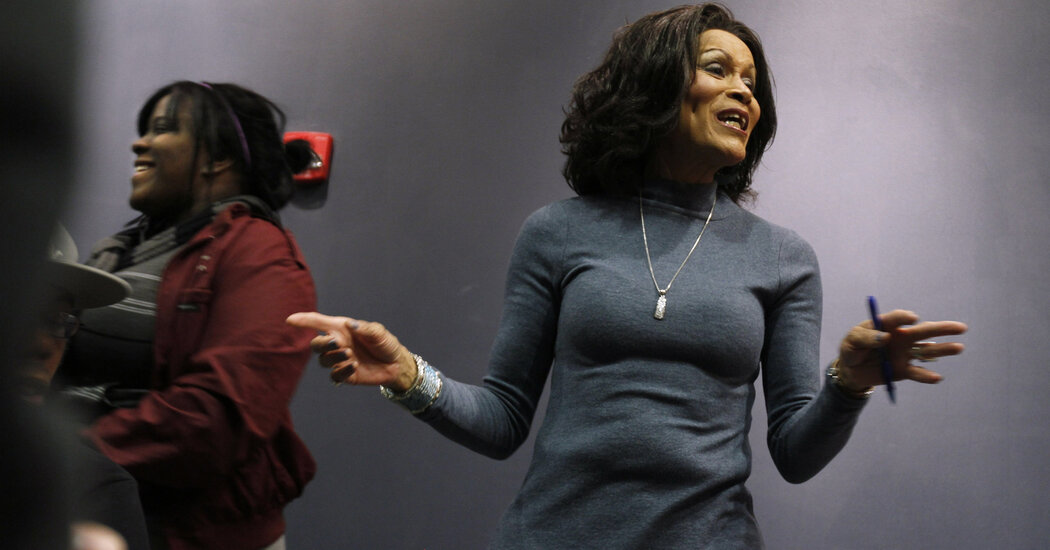 She overcame a life of intolerance and abuse to teach style, etiquette and life lessons to young transgender people who were at risk.

Gloria Allen, a transgender activist whose experiences running a charm school in Chicago for at-risk transgender youth inspired an acclaimed documentary film, “Mama Gloria” and play, “Charm,” died on June 13 at her home in Chicago. She was 76.

The cause was respiratory failure, said Luchina Fisher, a close friend and the director of the documentary.

Mama Gloria, as she was known, operated her charm school out of the Center on Halsted, a community center for L.G.B.T.Q. people in Chicago’s Lakeview neighborhood. The school was informal, free — Ms. Allen often paid for a student’s meals out of her own limited budget — and short-lived: It opened in 2012 and ran for less than a decade.

Attendees were usually transgender people in their teens or early 20s who were drawn from the economic margins. Lessons covered table manners, dating etiquette and job-interview comportment, as well as tips on hygiene, dressing and makeup. The goal was to help those who gathered to find jobs and confidence, said Philip Dawkins, who wrote the 2015 play “Charm,” a fictionalized account of Ms. Allen’s fwork with the school.

The woman The Chicago Tribune once called “the Emily Post of Halsted Street” did not come from privilege. She spent her adult years working as an X-ray technician, a licensed practical nurse, a motel clerk and a nurse’s aide for older people.

Still, she carried herself with a regal bearing, favoring elegant fur coats, gold jewelry and towering heels, an approach she hoped would inspire economically challenged young transgender people to present themselves with pride, Ms. Fisher said.

In addition to teaching etiquette, Ms. Allen tried to foster a sense of identity. “History was very important to Mama,” Mr. Dawkins said. “It was very important to her to teach her babies that they are not the first people to walk this struggle. She really wanted them to know about transgender pioneers like Chilli Pepper and Alexandra Billings, and the Baton club” — the Baton Show Lounge, a longstanding Chicago nightclub featuring drag and transgender performers. “She wanted them to know they were not alone,” he added.

Word of her efforts spread quickly.

In 2014, the transgender activists Janet Mock and Precious Brady-Davis presented Ms. Allen with the Living Legend Award at the Trans 100 awards, a ceremony celebrating 100 transgender leaders, sponsored by GLAAD, the L.G.B.T.Q. advocacy group. In 2021, she received the Carmen Vázquez Award for Excellence in Leadership on Aging Issues from SAGE, an advocacy organization for L.G.B.T.Q. elders, at the National LGBTQ Task Force’s Creating Change conference.

President Biden recently paid tribute to Ms. Allen at a Pride Month reception at the White House, where he announced he was signing an executive order to advance equality for L.G.B.T.Q. people.

“We’re in a battle for the soul of the nation,” the president said. “But when I look around this room here — and all of you here today, it’s a battle I know we will win.” He added: “We will do so on the shoulders of so many people who are no longer with us, but who paved the way for us. People like Gloria Allen, known as ‘Mama Gloria,’ who transitioned in the 1950s.”

As Ms. Fisher put it: “Gloria stood for liberation; she lived it. She liked to joke about how she was ‘out’ when she came out of her mother’s womb.”

“Mama Gloria” premiered at the Chicago International Film Festival in October 2020. A condensed version for television was nominated for a 2022 GLAAD Media Award; it’s available for streaming on the World Channel and PBS as part of the documentary series “AfroPoP: The Ultimate Cultural Exchange.”

Mr. Dawkins’s play was first presented at Steppenwolf Garage in Chicago. There were later productions in Minneapolis, Washington, Los Angeles and New York.

Ms. Allen was born on Oct. 6, 1945, in Bowling Green, Ky., the eldest of eight siblings. Her family moved to Chicago after her mother, Alma (Dixon) Allen, a showgirl, married her stepfather, Arteal Allen, who worked in a factory, in 1947.

Throughout her school years, Ms. Allen navigated public life as a boy, dressed in traditional male clothing — albeit with a feminine flair, Ms. Fisher said. Her female identity, however, was no secret to her family.

“She was telling her family she was a girl from when she was a young child,” Ms. Fisher said. “She would sneak away to put on her mother’s makeup and clothing, and one day her mother came home and said, ‘I believe there’s another woman in the house.’”

Ms. Allen took style cues from her mother, who once appeared as a model in Jet magazine and performed at nightclubs in Bronzeville, the South Side neighborhood long considered the center of Black culture in Chicago. She was also coached in female fashion by her maternal grandmother, a seamstress who designed outfits for so-called female impersonators who performed in those same clubs.

“My mother and my grandmother were supportive of me, and they didn’t want me to look like an overly done drag queen,” Ms. Allen said in the film. “And if my makeup wasn’t right, or my clothes wasn’t right, they’d stop me and tell me, ‘Oh, no, sister, you do it again.’”

Life as a transgender girl was “was rough in the ’50s and ’60s,” Ms. Allen was quoted as saying in a People magazine article last year, “but I was tough.”

She had to be. Ms. Allen was bullied as a youth and suffered a brutal sexual attack by a group of boys at her high school during her junior year, Ms. Fisher said. In the documentary, Ms. Allen recalled a 10-year relationship with a man named Kenneth whom she loved deeply, and with whom she bought a house, but who turned out to be physically abusive.

Ms. Allen recalled in the film that she considered herself a “weekend drag queen” in early adulthood and did not start living as a woman full time until her mid-20s, when she took a job at a motel run by an accepting owner. Soon she was traveling to the North Side for hormone injections.

“Then my breasts started coming in,” she said, “and I just fell in love with them.”

She eventually underwent gender confirmation surgery in her 30s. At her death, Ms. Allen lived at the Town Hall Apartments in Chicago, a residence for older L.G.B.T.Q. people.

She is survived by her brothers, Herbert, Albert, Michael and Phillip, and a sister, Sharon Smith.

Ms. Allen discussed her legacy in “Mama Gloria.” Speaking of the current generation of trans people, she said, “We paved the way for them, and they should acknowledge us.”

“Back then,” she said, “we were brutally murdered or beaten up, and I just couldn’t understand why they were doing this to me and to my sisters. But I got by. I made it through by the grace of God.”