Calling BS On Blaire White, One Video On How Sex Change Can Go Bad And Many For Whom It Went Fine - Science 2.0

Calling BS On Blaire White, One Video On How Sex Change Can Go Bad And Many For Whom It Went Fine - Science 2.0

Blaire White had an interview with a male to female post op transsexual / transgender who regrets having the operation in part due to complications of having had the operation.  Research has shown the overall satisfaction rate is about 91% with a rate of out and out regret of 2% (Boustos 2021).  The story of Shape Shifter a, detransitoner with regret is not unheard of. This is also true of many other surgeries.  Any surgery which requires general anesthesia will be a big deal and can go very wrong.  Any such surgery should be done with great care and if non surgical methods don't bring relief.  However, to insist because one has had a bad result the 98% who do not regret surgery are lying or part of some conspiracy "they don't want you to know" is logically fallacious, and empirically false nonsense.   While I am a fan of Blaire White I've called out YouTubers I am a fan of if they play fast and loose with the facts and she's no different.

Let me make it 100% clear right now.  I'm not calling her guest a liar.  He's probably telling the truth about himself, his medical situation, his feelings.  There is no reason at all to doubt him on that.  However, generalizing their experience to everyone is logically fallacious, and provably incorrect.

The easiest part to prove wrong is the idea no one told him the operation was a big deal.  Among the Trans and allied communities it is the only operation that one identifies themselves by as either pre (before it) post (after it) or non (not having it).  That alone is at least a clue that it's a big deal.   There is a book of 120 pages, the WPATH standards of care, that should've been followed and which were not in his case.  It is very well known in the community.

I say this to anyone considering a sex change, or "gender confirmation surgery" or whatever name we come up for it to consider this.  It is the only operation, among all the operations that one is either pre, post, or non .  That alone tells you the operation is a big deal.  If you have a medical provider who is cavalier about it run.  Any credible professional who does this operation will treat it as the serious matter that it is and want you to cross every I and dot every T of the WPATH standards of care.  Do not look for short cuts, do not accept short cuts.  The so called "gatekeeping" is for your own good.   It is not his fault that the shortcuts were taken.  It is still hard to believe that they didn't know of the WPATH SOC's and that they were clearly not being followed.

Having differed strongly let me concur with what Blaire White says  in voice over in this video.  The person below deserves our sensitivity and sympathy for what they have been through.    I am certain everything they said about THEIR experience is true, factual and sincere.

However, to claim that because you had bad surgery that most if not all of us have the same outcome as you is nonsense on the face of it.    Shape Shifter was let down by his medical providers.  Should've had more through mental healthcare in the first place. He should speak his truth but generalzing that to everyone is just nonsense.

For one thing Shape Shifter mentions faith.  I wonder if in some part he has not been made to feel as miserable as possible because he wants to be loved by his family.

A very well documented case.  I think the timeline of transition she followed is about as early as it should be.

One can dismiss her because she's famous and at least doing OK in other ways.  What if she was just a normal person.

Mardi Pieronek
A dear friend of mine a very normal person. Transitioned in the 70's surgery in the 80's.

Are there challenges to dilation YES it's surgery not magic.

So you see there is a case of someone decades post op.

Jazz Jennings
Another well documented case is that of Jazz Jennings who has had complications mainly, in my opinion due to having had too aggressive hormone blocking early on and weight.  One has to grow down below before one can have surgery.
https://www.womenshealthmag.com/health/a23828566/jazz-jennings-gender-confirmation-surgery-complication/

Jule Vu "Princess Joules who has documented aspects of her life around transition for years.

Conway's "Transsexual Womens Sucess Stories" over 50 such stories from the early internet.
There are also a TON of cases documented by one of my scientific heroes Lynn Conway.  This is an old time website from back when the only stories on the internet were bad ones.   Back when dialup was how one got on the net. https://ai.eecs.umich.edu/people/conway/TSsuccesses/TSsuccesses.html

Now that we have established it is not just a conspiracy of those dirty old scientists who want to make money off people or whatever here is what the research says.    This is the result of a meta analysis paper which looked at 57 studies and almost 4700 cases. (Bustos 2021 full reference info below.) 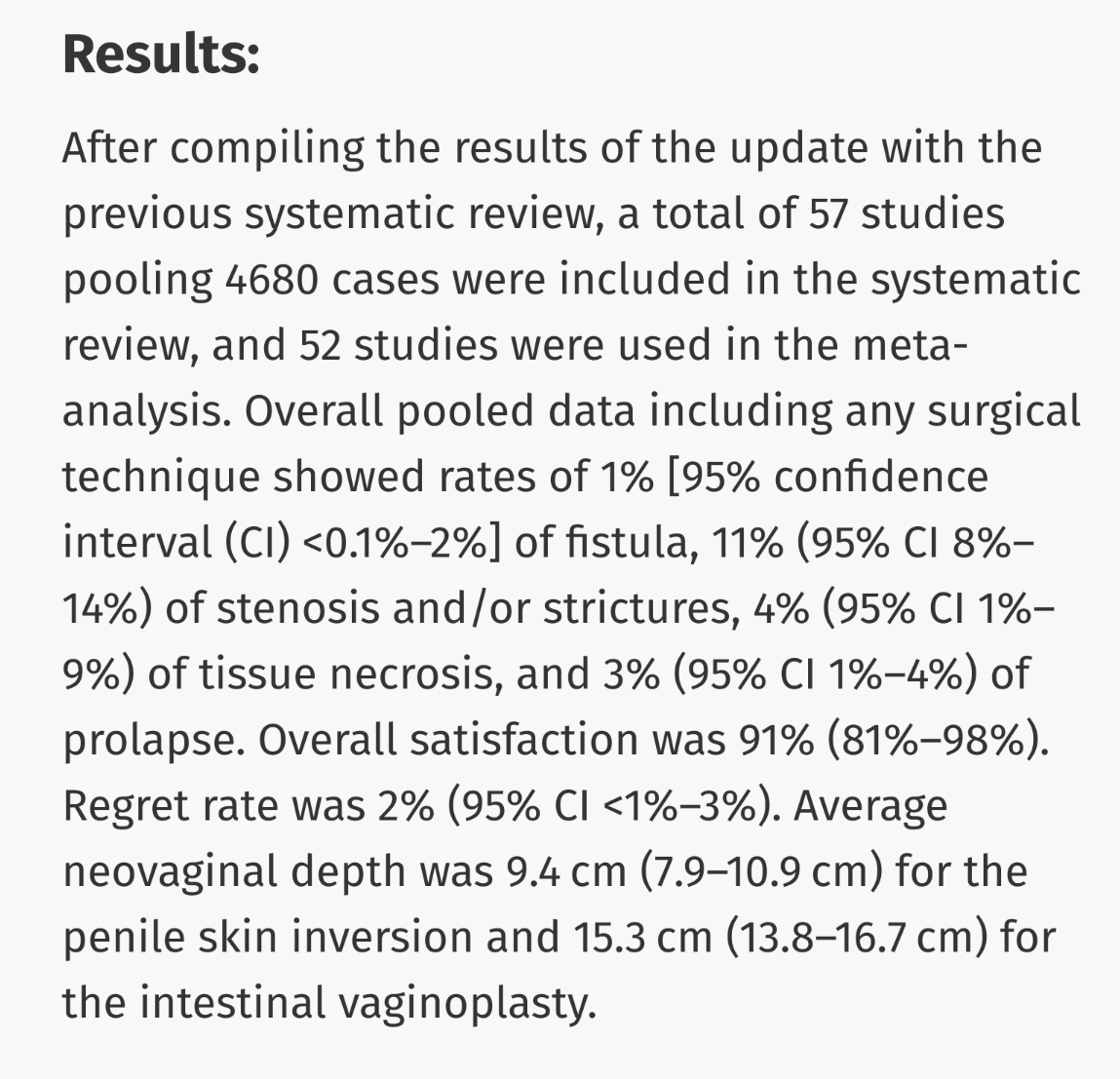 Overall satisfaction rate 91%  With a regret rate of 2%.

Note it does not paint some unrealistic picture of perfect surgery.   Anyone who sells it as such is not being truthful.  However, anyone who paints it as always awful is just plain wrong.

Cisgender allies come up with some odd ways to explain her. Often being that she wants conservatives to like her so bad.  I don't think so.  The truth is a lot of transwomen think like she does.  I know a transgender pornostar who says things on FB that sound like they came out of Blaires mouth.  This person is DEEP blue no matter who, not conservative at all.  Just an old fashioned transsexual pornostar. Who writes of being asked about it all the time.

I don't know Blaire White but having watched her videos longer than 90%-95% of people, and knowing people like her, and being trans myself,  I have an observation.

She has  a certain point of view as a non-op transwoman who is conservative which could clash with being non-op.  I felt the same way at a time. Having ones nads gives one certain options such as children by some method or means etc. She may feel a need to justify her choice to not have bottom surgery to the set of people she values who are right of center.  That is the charitable and probably correct way to look at her actions.

There is a TON of pressure to have bottom surgery. That is a fact.  Conservative trans women such as they exist tend to be post op.  Blaire being a conservative trans woman likely feels that pressure.   Traditionally (conservatively?) if one is not looking for the op one was not considered a transsexual but a transvestite.    Her actions are very easily understood as a way to show that there is nothing wrong with not wanting the surgery.    Where she goes wrong is in not even really considering that the surgery really does work out for 98% of the people that have it. That her content seems to demonize the survey, and calls liars everyone who has had it and is happy.

I'd bet she'd point out much of the research on this deals with people who had surgery back when there was more checking.  She'd be right.  There is a danger to surgery being too available.  The solution is not total prohibition though.  Which is what the Republican party of Texas would want.  If the party she seems to agree with had it's way, according to its platform, and the attorney general in her adopted home state she'd be in jail for sodomy.  (I didn't say it.  Ken Paxton did .  Write her AG an angry letter if you don't like hearing that.)

What I'd say to Shape Shifter if I could

What did strike me is how her guest speaks of being a less vibrant person having had the operation.  He looks pretty darn vibrant sitting there.  I am post op I am pretty vibrant.  I am a college professor who teaches math and physics and take part in an international collaboration that researches gravitational waves.  We'll be putting a space probe up to take measurements in about a decade. 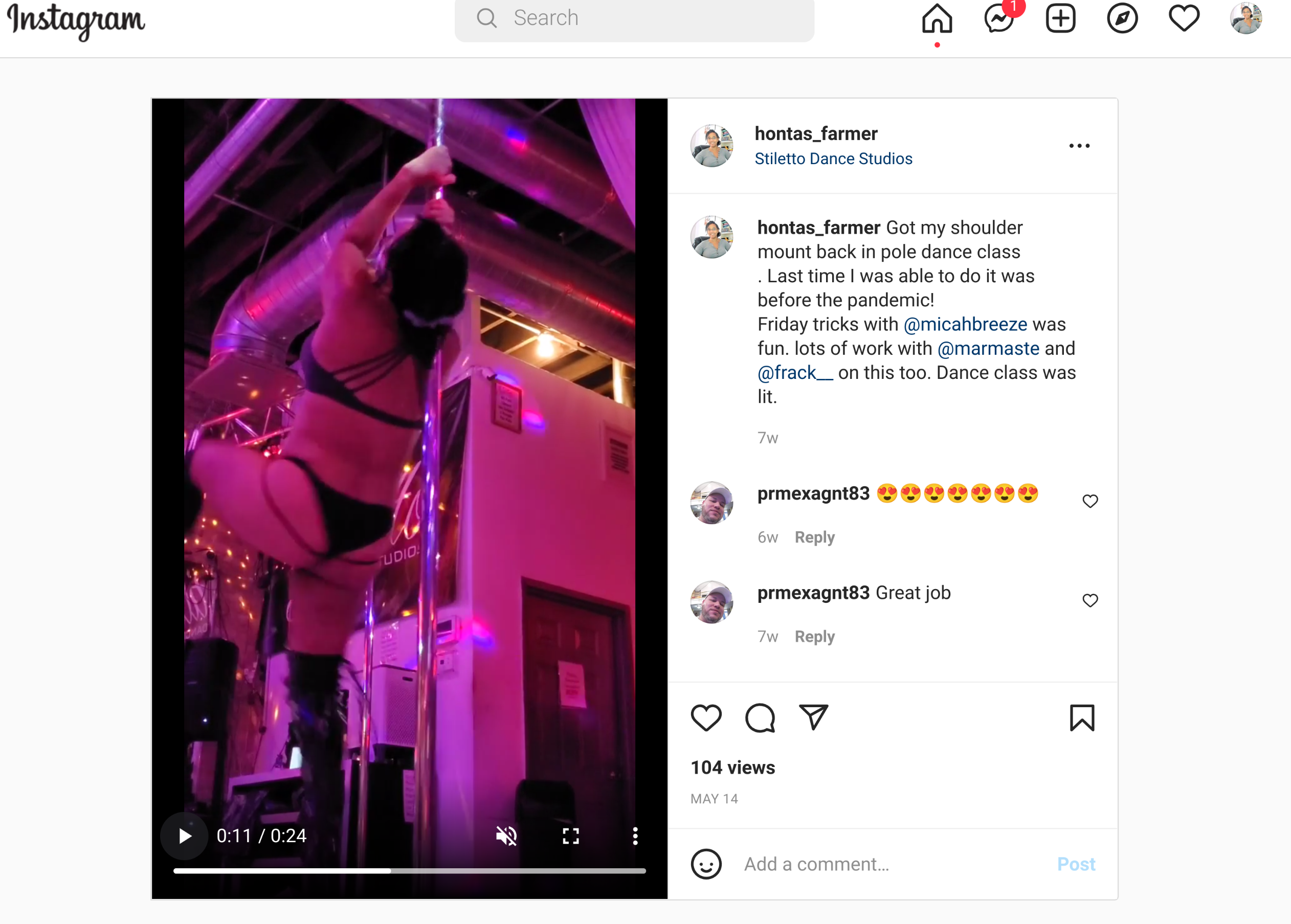 Look at me, look at the many cases I cited above.  They are vibrant and post op.   They'll tell you there can be issues but those issues can be dealt with.  It is surgery not magic.   Like me they would have compassion for you just don't say, or imply, we are all lying while asking for it.

One person having a bad long term result does not mean all of it is bad.  I had braces.  They made my teeth straight.  It was a painful process that started with two years of treatment of various dental problems I had as a result of crooked teeth.  The drilling, the blood, the months and years of pain and restricted eating.  I could tell that story and make it sound as bloody, gruesome, and gory as it was.   That does not mean it is a bad thing or should be banned.

While my heart goes out to people like Shape Shifter and those like him, their pronoun choice, the fact is they are 2% of the community.  Just as the wider world should not change in every way for the 1-2% who are trans.   Those who have complications or detrans should not expect all of us to change. At the same time we who are, in this cause the larger community should extend to those who detrans the same thing we want from the wider world.  Compassion, and empathy.    We can do that while also calling BS on BS when we see it.    We can walk and chew gum at the same time.