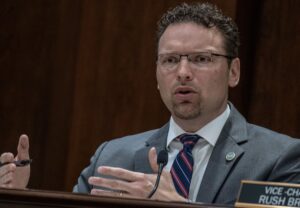 Sixty-two members of the House Republican Caucus signed the request in the wake of social media videos purportedly showing a physician calling the surgeries a “huge money maker” because of the number of follow-up visits required.

State Rep. Jason Zachary, a Knoxville Republican who wrote the letter, details “serious ethical concerns” about procedures Vanderbilt’s Pediatric Transgender Clinic is allegedly performing on minors, in addition to claims the hospital could be discriminating against employees who refuse to participate in the surgeries.

Zachary’s letter says he and his colleagues are “alarmed” by a Daily Wire report about “surgical mutilations” of minors and calls the clinic’s practices “nothing less than abuse.”

“While those 18-years and older are recognized as legal adults and free to make decisions in their best interests, it is an egregious error of judgment that an institution as highly respected as Vanderbilt would condone (and promote) harmful and irreversible procedures for minor children in the name of profit,” Zachary’s letter says.

The letter demands a response from the Vanderbilt University Medical Center Board of Directors within 10 days of receiving the letter and says that will determine what action the Legislature takes when it convenes in January.

Asked about the letter Wednesday, Vanderbilt University Medical Center referred questions to its statement after the Twitter videos were posted last week, saying the media posts “misrepresent facts” about the care it provides to transgender patients.

The hospital noted it provides care to all adolescents “in compliance with state law and in line with professional proactive standards and guidance established by medical specialty societies,” including requiring parental consent to treat minors for issues related to transgender care.

In the videos taken from 2018 and 2020, Vanderbilt physician Dr. Shayne Taylor calls gender transition surgery “a big money maker” but does not refer to children.

Another video shows a Vanderbilt plastic surgeon discussing guidelines doctors must follow before doing “top surgeries,” or double mastectomies, on transgender patients. Those include a letter documenting persistent gender dysphoria from a licensed mental health provider. Patients who are 16 and 17 who’ve been on testosterone and have parental permission can qualify, the doctor said.

A state law passed in 2021 prohibits hormone therapies – such as puberty blockers – for prepubescent patients, a practice physicians told lawmakers at the time was not part of their standard of care.

GET THE MORNING HEADLINES DELIVERED TO YOUR INBOX