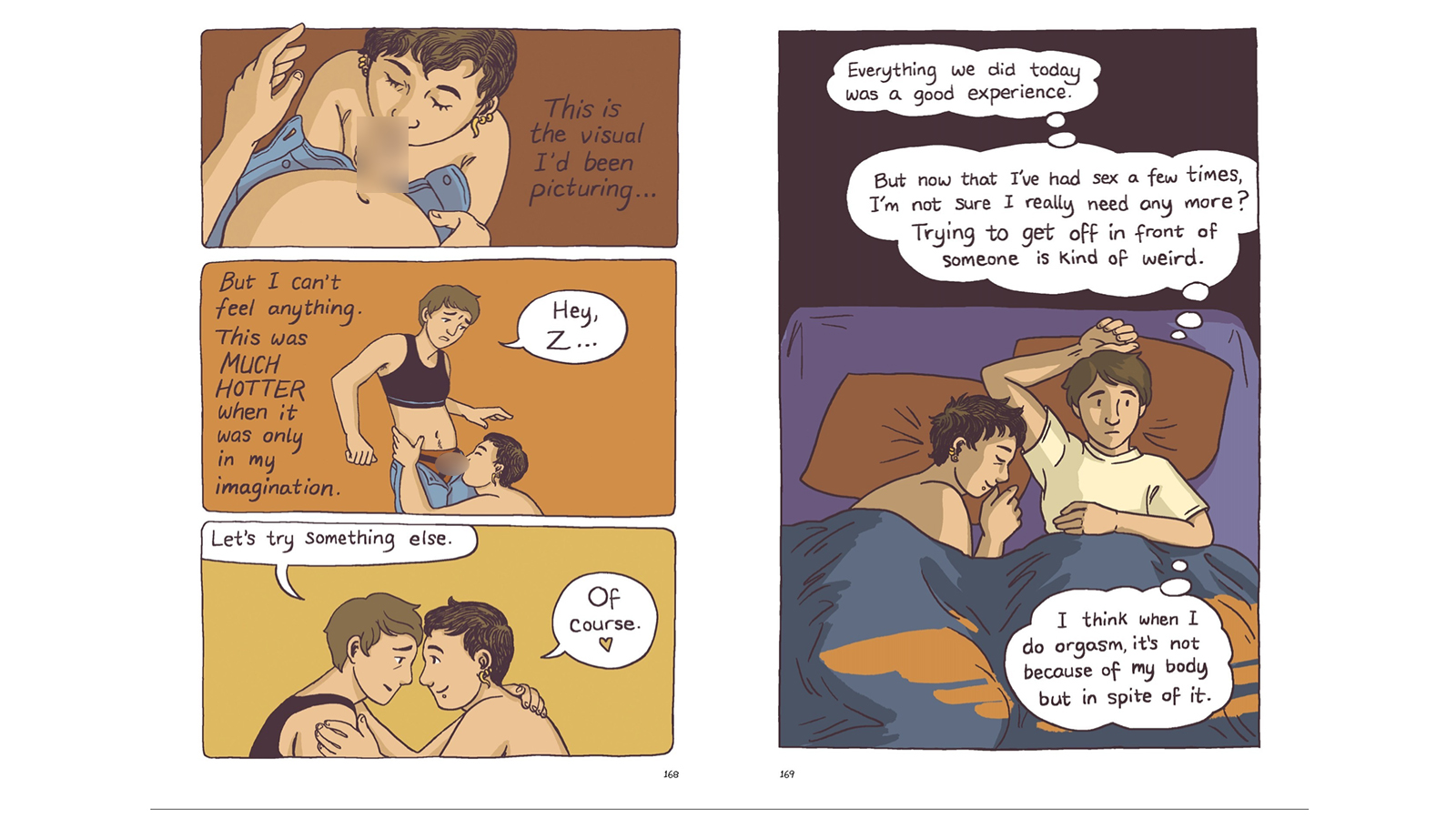 ***For All Things Wyoming, Sign-Up For Our Daily Newsletter***

The Natrona County School Board is deciding whether to keep two transgender- and gender-expansion-affirming books in the school library of Kelly Walsh High School.

The books are “Gender Queer” by Maia Kobabe and “Trans Bodies, Trans Selves” by Laura Erickson-Schroth, with several contributors.

After the books were challenged formally, a committee under the Natrona County School Board reviewed the books and decided Sept. 1 not to remove them from the school’s library. The committee has 30 days to release its official written report to retain the books, after which the school board could review the issue again if someone files an appeal.

The Natrona County School District did not immediately return an emailed request for comment.

Cowboy State Daily reviewed both books. They are roughly summarized below.

‘The Blow Job Of Your Life’

“Gender Queer” is a graphic novel autobiography in which Kobabe explains the journey from being a female child to a gender nonconforming adult. Kobabe communicates frustrations with the female reproductive system, the process of coming out to family and friends, and sensations consistent with gender dysphoria, such as the trauma of vaginal penetration during a pap smear.

The author also illustrates and narrates sexual experiences, particularly with a female the author met on hookup app Tinder.

Kobabe’s cartoon figure thinks, in a thought bubble, “HOLY SHIT,” then, “This is the most turned on I’ve ever been in my life. I am DYING.”

On the next page, Kobabe’s Tinder crush is depicted topless in two panels, sucking a fake nude penis attached to Kobabe’s body.

A “ship” is a hypothetical relationship between two people or characters in one’s mind, conversations or fiction.

The book ends on page 240 with Kobabe, now a comic-art and narrative instructor, resolving to “come out” to the “kids” Kobabe teaches in the comics class, saying it may be a “disservice” to confused kids to stay silent.

“Trans Bodies, Trans Selves” is a textbook-style reference book dealing with many types of transgender and gender expansive identity, from language, surgery, sex, parenting and HIV to social presentation.

From its outset, “Trans Bodies, Trans Selves” touts exposure of trans issues as a potential mitigator of violence and social disparities among some gender-expansive people.

“Trans sexuality is infinite in its variety,” the book states on page 15. “Studies show that diverse sexualities outside of lesbian, gay, or straight, may be more common among trans people. It may also be more common for trans people to identify with asexual or aromantic identities – identities that are understood poorly even within the broader LGBTQ community.”

The author continues: “Polyamory and kink practices are likely to also be more common among trans people … it is free form.”

Multiple pages of “Trans Bodies, Trans Selves” instruct the reader on where to find trans pornography and how to make it.

“Using ONLY the word/identifier trans may not result in including any trans person whom society does not see as trans,” a contributor wrote. “The use of feminist, queer, and sex positive broadens the search for trans women/femmes, trans lesbians, trans fags, gender fuckers, and all trans no/op, pre-op, and post-op folks.”

“Just start filming and get comfortable around the camera,” another contributor wrote.

The book encourages polyamory as an option when one’s sexual needs aren’t met by one person alone.

“Many of us find polyamory or non-monogamy preferable,” the author writes.

Meeting people in bars, clubs, on websites and apps all are encouraged as alternate options for hooking up with sex partners. A fetish website name is offered for “those of us who are kinky” and looking for “other kinksters or fetishists.”

Many adult sex platforms, the book says, “have fallen prey to the whims of queerphobic and sexphobic legislation.” The book specifically bemoans the passage of the “Fight Online Sex Trafficking Act,” which it says was intended to stop sex trafficking but has “resulted in further stigmatizing, criminalizing, and endangering … (people in) sexual activity” and “sex work.”

The book warns readers to become familiar with laws regarding sex work “in your region.”

Pointers for how to behave when dating sex workers follow.

The text addresses the myriad changes that can occur during emotional, social or physical transitions from one gender to another, or into a gender-expansive identity.

“The bundle of tissue commonly referred to as the clitoris – which many AFAB (assigned female at birth) trans people call their dick, cock, or dicklet – may double, triple, or quadruple in size from testosterone,” reads the text on page 455. There are tips included for keeping the “front hole” or vagina lubricated and active, and preventing tearing after testosterone use.

Top surgeries, which include breast augmentation or removal, also come with changes in sensitivity, the book states.

“Orgasm was different after starting E (estrogen) and T-blockers,” wrote a transgender woman in the book. “Before, it was just a squirt. A really, really good squirt, but all the feeling was centered in that one body part.”

But after starting estrogen, the trans woman experienced “an explosion of warmth all through my body” which was “harder to achieve” and demanded emotional investment.

The book warns that it is safest to explain one’s gender identity to a partner in the early stages of dating, not in the bedroom, to avoid potentially violent situations.

“We may have had breast augmentation and vaginoplasty, and we feel we are at low risk of a partner finding out we are (transgender/gender-expansive) without our telling them,” the book continues. “The point at which we choose to discuss our status with a partner is up to us.”

‘Some Girls Have Penises’

The book features a chapter for families of children who reject their biological sex.

“Acceptance translates to the best care, protection, and advocacy for (the transgender/gender-expansive) child,” the book says. It encourages parents to seek counselors “familiar” with trans and gender-expansive children.

“Do not try to convince the other parent or yourself that your child is going through a phase,” the book continues. “Days, weeks, or even a few months may constitute a phase. A year or more is significant and should not be dismissed.”

“If a (trans/expansive) girl is told that the sole reason she is not a girl is that she has a penis, it is understandable that she may come to see her penis as what invalidates her core identity,” the author writes on page 512. “Many children immediately find it relieving to hear that some girls have penises and some boys have vulvas.”

On page 517, the author includes a list of hospitals that provide medical treatment for transgender youth.

“What happens if a child has transitioned to a different gender and then later says they want to ‘go back’?” the book asks. “Does this happen? The answer is yes, but rarely.”

If it does happen, the author continues, the child should be loved, supported and validated in that detransition.

The author contemplates chemically “delaying puberty” as a pause allowing “more time for discernment,” and the slow increase cross-sex hormones in children as a source of “greater clarity and direction.”

The author encourages parents to push for trans-affirming training by school staff and trans acceptance in school and other facilities.

“Allow students to self-select to use the facilities that conform with their gender identity,” the book reads on page 528. “This can be as simple as changing signs on multistall restrooms or making single-stall restrooms all-gender.”

***For All Things Wyoming, Sign-Up For Our Daily Newsletter***