From textile rags to riches - The News International 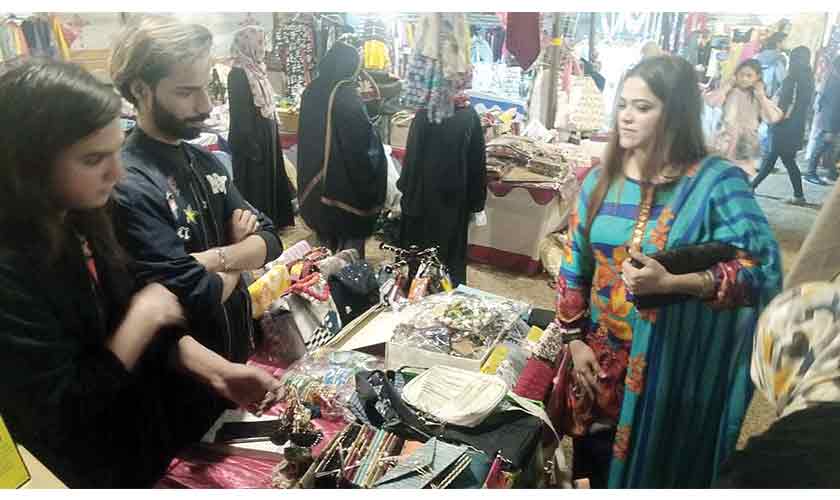 From textile rags to riches - The News International

ori (not her real name) studied to be an accountant, but her BCom degree didn’t quite come in handy when she was looking for work. Reason: her gender identity.

Last year, she learned about job opportunities for trans persons at a textile recycling facility. Initially, she was a bit reluctant to apply for it, as she thought that it wasn’t suitable for someone with her qualification. But then she says she was bored of sitting at home all day, doing nothing. So, she went ahead and took up the work for which she received hands-on training.

“Here’s a handbag that I made,” she tells TNS, holding a multi-coloured bag in her hand. “It’s made of rags.”

Today, she has the self-confidence to say she can be a fashion designer — “provided I pursue it academically.” She is also hopeful that she’ll have her own boutique one day.

Gori is one of the seven trans persons who have been employed by Baazyaft, a textile waste recycling facility that hires people from trans community to look after its core operations. The unit is housed at one of the rooms in Fountain House.

In Pakistan, the transgender community faces serious social prejudice and abuse, despite the fact that we are one of the only 12 nations in the world that recognise transsexual identification on the national ID cards. Besides, through legislation, Pakistan gave basic rights to transgender people in the Transgender Persons (Protection of Rights) Act, 2018.

According to Bushra Ali Khan, who launched Baazyaft in 2021, there is a wide difference between policy and protection. Her own journey has been long and tedious. “It was essentially founded on the triple Ps — people, planet and profit,” she explains. “We were looking at empowering the transgender community. Secondly, we want to bring into use the textile waste which is usually carried to landfill sites where it is reduced to an environmental hazard. Eventually, the items made with recycled waste are sold and some revenue is generated.”

Khan admits that the hiring process was quite a task. “We expected a lot of trans people to walk in, looking for work. But that never happened. In fact, there were just a countable few [trans persons] who were interested in joining us.”

The hiring process was quite a task. “We expected a lot of trans people to walk in, looking for work. But that never happened. In fact, there were just a countable few [trans persons] who were interested to join us.”

Those hired were supposed to participate in a training programme in fashion design, sewing and textile waste recycling, at the STEP Institute of Art, Design and Management. “We had a fantastic experience working with trans individuals,” says the CEO of STEP, Gouhar Pirzada. “They proved to be quick learners. The programme originally had separate sessions for them, but I preferred to integrate them in the main classrooms. They overcame the challenges associated with a lack of inclusion and integration and formed great bonds with other children and participated in extracurricular activities. Some of them showed a great aesthetic sense and presented unique ideas for art and design.”

Pirzada says he still visits the class though the training session took place over a year ago: “The idea is to monitor their progress and improvement. Their actual struggle begins now — trying to find a job, collecting textile waste, making crafts and selling them etc.”

The group also received assistance from Akhuwat, a microfinance system, in providing space at the Fountain House.

Maya Malik, an employee at Baazyaft, says she likes everything about her job: “It’s a safe workplace, and we enjoy working with one another.”

The group of seven trans persons arrives at work in the morning, and gets busy with the tasks delegated to them. Their proud creations include tie-and-dye bags, embroidered clutches, notebooks with cloth coverings and school bags.

On the other hand, Bushra Ali Khan takes care of the collection of rags and leftover garments from tailors and boutiques. She also helps to sort them before transporting them to the production plant for processing and subsequent sale.

As good word spread around, Baazyaft attracted more and more people who were ready to contribute. Brands such as Texlynx, Jasmin, Libaas Khas, Limelight and local tailors contributed their waste material while the likes of Walled City of Lahore Authority (WCLA) and Women’s Resource Centre and Incubation (WRC & I) offered free space for the Baazyaft products.

Khan says that textile recycling machines are the need of the day, in a country where the textile industry has replaced oil as the second largest polluter.

It is evident that Baazyaft, which means regain, has fired up the dreams of those involved in the initiative.

The writer is a media veteran interested in politics, consumer rights and entrepreneurship

Read this on Fashion